First year student Monty Lord has used his A Level knowledge and recent experiences to settle a court claim and set up a foundation which supports Children’s Rights.

Here at Runshaw, we offer many varied opportunities available to our students. Many students seize these opportunities with both hands to enrich their learning experiences. We’ve seen some amazing examples of community-minded students over the years. A recent example is that of one of our first year A-Level students, Monty Lord, who studies A Level Law, Politics and an Extended Professional Qualification (EPQ) looking at children’s rights. You can read his story below. 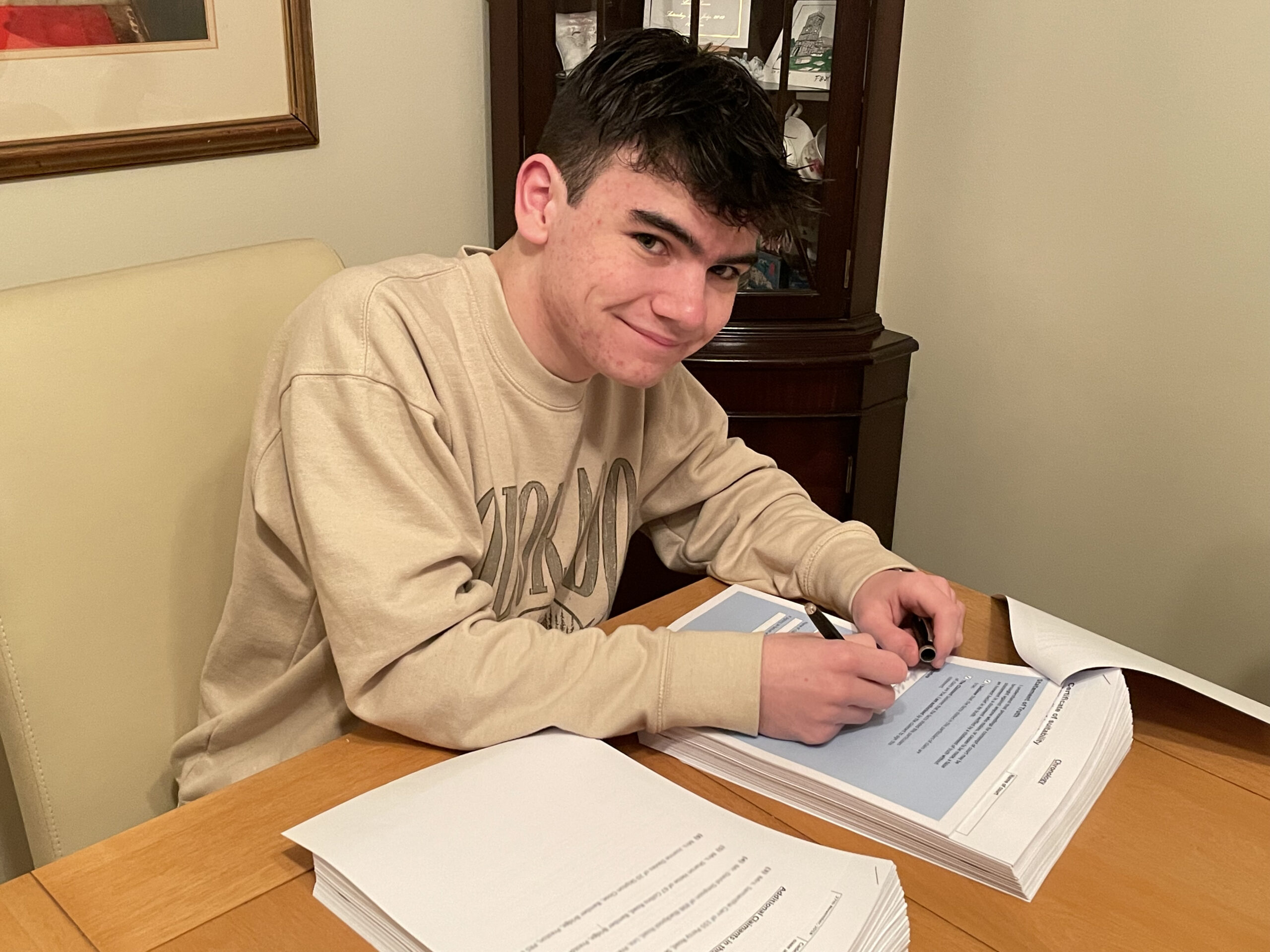 After witnessing multiple incidents of bullying and abuse at a local youth organisation, Monty decided enough was enough. He’d heard other children and staff discussing serious issues that had occurred and decided to investigate the matter himself, using his A Level revision notes, a law text book and his enquiring mind.

In the court claim, Monty represented 11 injured parties and 6 claimants. The organisation in question eventually offered payment, paying the full amount in damages to all of the claimants plus court costs, amounting to over £1,000. Monty brought the claim for a breach of contract under the Consumer Rights Act (2015), citing the victims’ experience was not of satisfactory quality, not fit for purpose and did not meet expectations. The whole case was based around multiple reported and documented incidents of bullying, abuse and homophobic behaviour.

During Monty’s preparation for this case, he diligently took statements from all of the claimants and witnesses, stretching to 317 pages of statements and documents and a staggering 85 documentary exhibits, about how dire things had become. Despite the overwhelming evidence and disclosures from their own trustees and staff throughout the court claim, the organisation in question have continued to deny any wrongdoing. They initially offered ‘ex gratia’ payments and tried to get the claimants to agree to never again bring another claim against them. Monty rejected this and pointed out that this was both unfair and overly-restrictive. Seven days later, the organisation offered to settle out-of-court, paying the full damages to all claimants. The case received coverage in both The Telegraph and Daily Express newspapers.

Regarding this Court case, Monty said, “It wasn’t about winning or jurisprudence, it was about challenging unacceptable behaviour that has no place in the 21st century. They refused to acknowledge their behaviour was wrong, refused to change and so the law provided the ideal vehicle to re-educate them in their responsibilities to the public. They claim to take a zero-tolerance approach to abuse. I think they have a substantial misunderstanding of what’s meant by the term Zero. This is one of the reasons why I enjoy studying law, to address the wrongs we see around us and to challenge unacceptable behaviour.”

Monty now sits on the National Anti-Bullying Youth Board and advocates on behalf of victims of bullying and abuse. He has the following advice for all Runshaw students:

“If you’re not happy about something or it doesn’t feel right, don’t suffer in silence. Challenge it and you can always speak to someone in confidence. Believe it or not, as a child, we actually have more rights, in law, than adults.”

Following on from these experiences, Monty set up Young Legal Eagles and secured the trademark for the term, to help raise awareness in children and young people about their legal rights. He is now building upon the findings in his EPQ report by working with a charity and a production company to produce a short documentary about children’s rights.

A burning passion for human rights is not the only flame Monty carries. After his extensive work raising awareness of mental health issues and volunteering, he has been appointed as one of the Queen’s Batonbearers, carrying the Queen’s Baton during the forthcoming Platinum Jubilee and Commonwealth Games.