Welcome to the Amanda Roocroft Theatre

The Amanda Roocroft Theatre is a 128 seat space hosting a number of dance, drama and musical theatre productions each year with a student cast and produced by staff all of whom have experience of working in professional venues and productions. Amanda Roocroft has secured an international reputation as one of Britain’s most exciting singers – in opera, concert, and in recital. Originally from Chorley, Amanda attended Runshaw between 1982-84 and graduated from the Royal Northern College of Music.

In concert, Amanda has appeared with leading orchestras throughout Europe and North America and has performed at many of the world’s leading opera houses and festivals including the Royal Opera House Covent Garden, the Glyndebourne Festival, the English National Opera, the Welsh National Opera, the Bayerische Staatsoper in Munich, the Netherlands Opera and the Salzburg Festival.

The theatre is named after her both in recognition of her outstanding achievements and as an inspiration to our students to follow their dreams.

We are on Social Media!

Towards the end of a global pandemic, in the middle of a cost of living crisis, and potentially at the start of World War Three, Rio and Tana are trying to figure out if they’re together or not.  They were.  But then they weren’t.  And now they might be.  Or not.  It’s all a bit confusing, and that’s before we even get started on the communists, feminists, adopted parents, real parents, and the rogue computer program that’s taking over the world.  Oh, and the cream crackers too.  Mustn’t forget those.

The Y2 Actors’ final major project is sometimes serious, sometimes comic, and features lots of music by David Bowie.  What more could anyone ask for?

Take your seats at the cabaret tables as we round off the year in style with dancing, music & singing from students from across our Music & Performing Arts courses! With only 2 performances be sure to get your tickets quick to avoid being disappointed!! 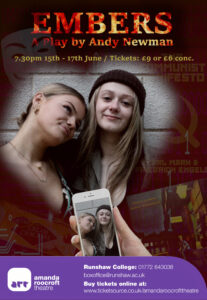 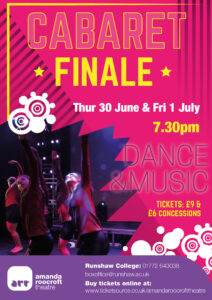